Elvis and the New Left at Indiana

Elvis Jacob Stahr Jr was a person of considerable accomplishment. His life had been a string of consecutive successes – BA Kentucky ’36 where he was Cadet Colonel of the ROTC regiment, Rhodes Scholar at Oxford, prestigious law firm in New York, distinguished WWII record, dean of law at Kentucky, vice chancellor of Pitt, president at West Virginia, and Secretary of the Army under Kennedy (JFK). In ‘62 he became President of Indiana University (IU), and his luck ran out.

Stahr succeeded Herman B. Wells, IU’s long serving, legendary statesman-president, admittedly big shoes to fill. In his inaugural address, President Stahr spoke eloquently of further enhancing the university’s international research reputation while simultaneously accommodating the wave of Baby Boomers pouring into American higher ed. He also seemed preoccupied with the Cold War. Fresh from Washington where he’d played an important role in the Berlin Crisis of ’61 as Secretary of the Army, President Stahr said: “Military power of the most advanced kind will be essential to protecting freedom so long as the forces of antifreedom themselves have such power and are not content to stay at home."

In his long address, the students got short shrift, a paternalistic nod, “they are questioning, debating, impatient, ambitious, sometimes confused, always expectant, never wholly good, never really bad ….” If any students were in attendance – I was not, studying for my PhD prelims – they might have been a bit put off by the all too familiar in loco parentis rhetoric.

By the time brother Jeff Sharlet finished his Vietnam tour and returned to IU in the fall of ’64, the placid waters of academe were stirring as troublesome events far away were coming into focus. JFK had escalated US involvement in the Vietnamese civil war. South Vietnam’s president had been assassinated in a coup on Jeff’s watch in ‘63. Political instability and social unrest followed. Students for a Democratic Society (SDS) was building membership on the nation’s campuses. Watching and listening, a small group of ‘questioning’ and ‘impatient’ students at IU, including ex-GI Jeff, were becoming angry and restive.

Several months later during spring ’65, President Johnson (LBJ) escalated the Vietnam War even more dramatically, and the IU cohort, along with students at many other schools, reacted in protest. Jeff and compatriots began gathering Friday afternoons on Dunn Meadow, a great lawn officially designated as a ‘free speech’ zone, where the air was filled with talk of civil rights, economic disparities, and the burgeoning war halfway across the world. A teach-in was launched at the University of Michigan -- faculty experts leading students in discussion of the war. The Ann Arbor event was broadcast, and concerned students at IU and elsewhere listened in via a telephone link. SDS organized an April antiwar march in Washington DC that exceeded all expectations; the IU group sent a delegation.

President Stahr’s record in dealing with ‘questioning’ students at IU was a mixed one. During the Cuban Missile Crisis in the fall of ’62 an ad hoc group of IU students announced its intention to demonstrate against “US aggression;” an IU student writing in The New Republic (TNR) reported that Stahr had urged the student body to ignore the dissenters, saying “The most effective way to deal with minorities with whom we disagree in the present … situation is to ignore them completely.”* In a letter later published in the local Bloomington paper, the TNR writer followed up, criticizing Stahr’s belief that it was “his function as President to use his office and means of communication to militate against a group of his students before the group has fully stated and defended its ideas.” The small group did protest the US naval blockade of Cuba by marching from the county courthouse to the IU campus; campus security stood by while a large, angry mob of conservative students threw punches and objects at them.

The following spring of ‘63, three student leaders of IU’s Trotskyist Young Socialist Alliance (YSA) were arrested and bound over for trial under Indiana’s anti-communist statute. Stahr earned high praise for himself in a New York Times editorial for refusing to take university action against the ‘Bloomington 3’, as they came to be known, declaring, “We have far too much to lose ultimately if we unleash the forces of suppression under the guise of protecting freedom.”**

By the academic year 1966-67, a strong SDS chapter was functioning at IU, trying to educate the student body on the war and mounting demonstrations against a series of prominent pro-war speakers appearing on campus. President Stahr in turn was rapidly losing patience with the ‘impatient’ critical minority on campus. In his remarks to incoming freshmen for the academic year 1966-67, he criticized an impending student demonstration in language suggesting subversion of “basic freedoms” was at hand.

Then at the end of the Fall term, in his annual ‘State of the University’ address to the faculty, Stahr singled out the campus New Left for sharp criticism, saying, “We are fortunate in knowing a good deal about the motives of the leadership of the so-called ‘New Left’,” and used terms like “dogma”, “conspiracy”, “deceit”, “puppets”, and “propaganda”. In February ’67, with the university budget in jeopardy in the conservative state legislature, the president issued a statewide release of his text, which also included a sly reference to the Hitler Youth in universities of Weimar Germany.

To say that Stahr’s public remarks were intemperate and inappropriate for an institution of higher learning would be an understatement, and Jeff, by then the elected SDS president, took note and responded. First, he and SDS vice president Bob Tennyson wrote an open letter asking President Stahr to either retract his attack or substantiate his charges. The president responded, effectively denying that he had made an attack; thus, there was nothing to retract. Jeff and Bob replied, quoting verbatim the offensive remarks in the president’s text and suggesting that perhaps he hadn’t read his own speech.

In a fuller response to the president on the following day, March 9, 1967, Jeff gave a 2500 word counter-address, “The Role of the New Left on Campus: The State of the Student”, at a weekly gathering to an audience of over a hundred activists; his remarks received wider circulation in the campus alternative paper where he was introduced as president of IU SDS, a senior Honors student in Government, and a veteran of the Vietnam War. Jeff began, “The presence of the left on campus is by no means a new phenomenon,” but, he added, time and circumstances had changed the thrust of its stance. The Old Left had critically engaged the larger society while the New Left across the nation was taking on the university itself and its role in society at large. Not surprisingly, Jeff continued, New Left criticism was evoking a harsh response from university administrators hoping to silence, “discredit and render ineffective student action on the campus”; he illustrated, quoting some of President Stahr’s choice phrases such as “enemies of freedom” and “a cynical effort to exploit the idealism of students.”

Jeff commented that “these are not the statements of a lunatic right-winger but of the president of our university whose professed concern is the education of our country’s youth.”  The main body of his speech followed – the prevailing New Left critique of the “corporate liberalism” of the modern university, its broader implications for American society, and a call for ‘Student Power’. Closing his remarks, Jeff called for more faculty and student participation in the intellectual life of the university and a more balanced convocation policy on a campus where only pro-war advocates such as Richard Nixon, General Taylor, and General Hershey were invited. Jeff stated that, absent anti-war speakers to engender debate, the New Left would continue presenting alternate views on the war and other issues of the day to the campus community at large. 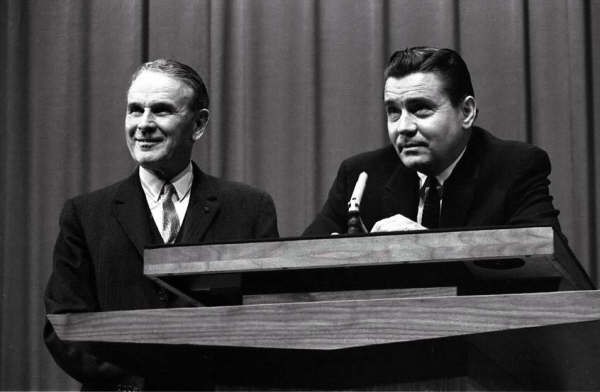 President Stahr introducing General Maxwell Taylor, ‘66
We have no way of knowing Stahr’s reaction to the ‘State of the Student’, but we can guess he was extremely displeased because a little over a year later he fled academe, abruptly tendering his resignation as president, citing “presidential fatigue.” It was a convenient euphemism for a person acknowledging the first setback in a long succession of career achievements. As a man more suited to positions where no one pushed back, Stahr had clearly been temperamentally unsuited to lead a major university through turbulent times.

At Indiana University, by no means the most restive campus in the country, Elvis Stahr, in spite of his inaugural rhetoric about ‘questioning’ students, was well beyond his comfort zone. He had served only six years as president, a relatively short tenure. In an interview in Time marked by bitterness and vitriol a few months later, Stahr referred to activists as bigots and zealots “determined to destroy” and denied he had deserted his post.*** Moving on, he became president of the National Audubon Society, a quiet venue where he reburnished his laurels, generally receiving high marks. At his death 20 years later, Elvis Jacob Stahr Jr was interred at Arlington National Cemetery.